Are You Built For Speed? How To Add Velocity to Your Golf Swing Speed

1. Understand the biomechanics of club head speed.
2. Get your lower body activated.
3. Get your upper body in sync.

To maximize your velocity in the golf swing, you have to get your upper body and lower body to work together, which is easier said than done.

One of the major issues preventing golfers from properly syncing the upper body with the lower body is that each is moving at a different speed.

The legs, which are closer to the "eye" or center of your golf swing rotate slower, though no less powerfully, than the arms and upper body, which are farther away from the center of the swing. The club head, which is the farthest from the "eye of the swing," moves the fastest.

Physics of the Golf Swing

To understand the physics, let's go back to when you were a kid goofing around with a record player and your army men. The army guys you put on the inner part of a spinning album stayed put, but the guys you put near the outer edge of the album would go flying off -- especially if you cranked the RPM to 45.

The LP was made up of one solid piece of vinyl, so there was never a problem with the inner part not being in sync with the outer part. The first track of the album on the outer part of the album played just as correctly as those on the inner part -- unless, of course, everything was too scratched up from your army men. You, though, last time we checked, weren't a flat piece of vinyl. Synching your upper and lower body isn't something that necessarily comes automatically.

What happens when people can’t get their upper body and their lower body on the same page?

Consequences of an Arms-y Swing

A lot of the time, they simply go with a very arms-y swing. We covered some of this in an earlier golf fitness blog, Reconnecting Your Body. You can swing a golf club using just your arms. It doesn't weigh a whole lot, so you can get away with a really arms-y swing if you want to. I'm sure you've seen, or played with, many folks that play this way. There are a couple of problems with this, though. One is going to affect you on the course and the other is going to affect you off the course. 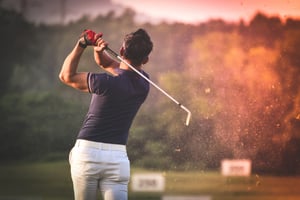 On the course, if you're swinging with just your arms, you're missing out on a lot of power, distance, and -- yes -- velocity. Powerful muscles in the legs and the powerful rotators of the hips are completely taken out of your game. You might as well be playing while sitting in a chair.

Off the course, all of that repeated explosive and rotational movement around the spine will eventually cause your lower back to rebel against you. We just weren't built as species to rotate that dynamically around the spine.

So, how to avoid flimsy drives and having to buy Motrin by the pallet?

You learn to sync up the rotation of the upper body with the lower body so that you're getting the most out of your swing and maximizing your velocity. A good place to start would be the Fitness Friday video on this page. It'll show you a simple and easy way to get your upper and lower body to work together in a coordinated way.