3 Golf Training Program Exercises You Can Do All Year Round 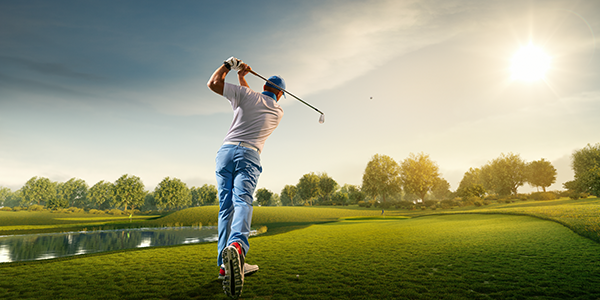 We're really lucky to be living down here in Florida. As long as it's not raining, it's a golf day. Of course, we realize that everyone isn't this lucky. In many parts of the country, the golf season may be as short as six or seven months. We get asked all the time about how someone's workout should change from the fall to the winter to the spring and into summer. It's a great question because there are definitely things that you want to be doing in the off-season or pre-season that you might not want to be doing once you're out playing 18 on a regular basis.

We've broken down the calendar into the off-season, pre-season, and in-season to let you know what our training plan is for each period. And to take things from "theory" to "application" and to let you get a sweat going, we've included three season-specific variations on the same exercise. Feel free to add these into your golf training program to help you keep optimizing your body for the game, whether there's three feet of snow on your lawn or it's sunny and 80 and you've got an afternoon tee time.

If you live in the northern two-thirds of the country, your off-season is December through February. For the pros dealing with the PGA Tour's almost non-stop schedule, it's a lot shorter. This is the time when we want to lay down the foundation of strength and endurance that we're going to build on for the rest of the year. We may have players go a little heavier with weights and do some more intense conditioning work, but we can get away with it because our Tour players aren't hitting thousands of balls a day and playing multiple rounds per week.

A great way to build the muscles of the chest, shoulders, and triceps. This big pushing movement will help you develop explosive strength and power and the added triceps work will help you stabilize the elbow during the swing to improve accuracy.

Lie on a bench with a reasonably heavy dumbbell in each hand. Weights should be at your armpits with elbows pointing toward the floor. This is the starting position. 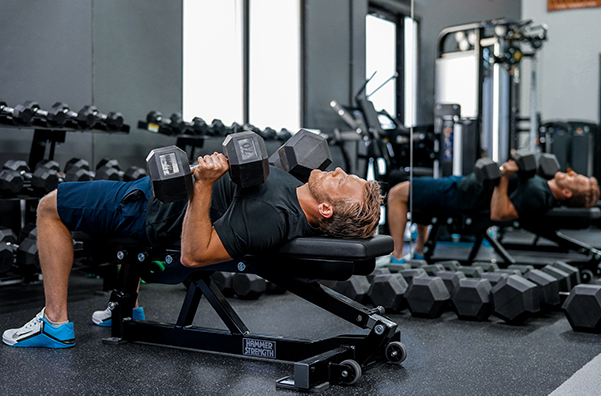 Moving both arms at the same time, punch the weights towards the ceiling. At the top of the movement, with your arms fully extended, the dumbbells should be close to each other without touching. Stabilize the weights in this "up" position and then carefully reverse the movement to return to the starting position. Shoot for three sets of 10-12 reps. 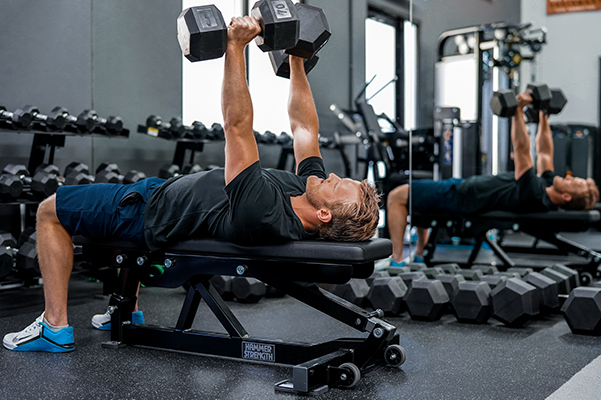 Pre-season is when we transition into more golf-specific movements. It's when we think about how all of our off-season exercises translate into more power, accuracy, and consistency out on the golf course. In the pre-season, which for a lot of the country is March and April, the weather may not be good enough for you to play a full 18, but there are some days when you can escape for some practice time to hit a bucket of balls. This gives us some nice feedback on how our progress is going. In the gym, we might lower the weight in order to focus on things like balance, stability, and golf-specific coordination. We'll also add in a few more moving parts to each exercise to increase your sense of body awareness.

A similar move to the off-season chest press but with more golf-specific focus. The instability caused by lying on a ball instead of a solid bench will force your legs, hips, and core to become involved in stabilizing you. Moving in an explosive way with alternating arms will also engage the spinal rotators that are so vital for creating power in the golf swing.

Lie back on a stability ball with a medium-weight dumbbell in each hand. Your head and shoulders should be supported in a neutral position on the ball -- your head shouldn't be hanging off the end of the ball, nor should your chin be jammed into your chest. This is the starting position. 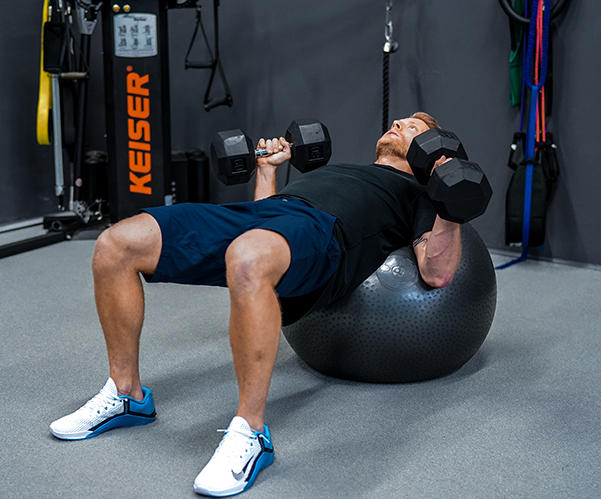 Explosively punch your right arm toward the ceiling. Move with such force that your right shoulder comes off the ball slightly. As you're lowering your right arm back to the starting position, punch your left arm up to the ceiling. This time, let the force of the movement lift your left shoulder off the ball. Continue alternating until you've done 15 presses on each side. Despite the fact that this is an upper body exercise, you WILL feel it in your legs, glutes, and core. Do three sets of 30 alternating presses. 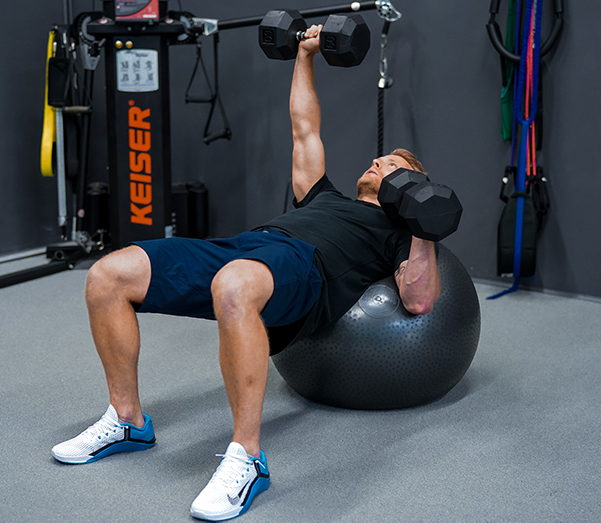 Once you're into your playing season, the goal of the workouts is maintenance and injury-prevention.  Movements are still similar to those we do in the off-season or pre-season but are done with less resistance. But don't let the lighter weights fool you; the added focus on balance, stability, and body awareness will keep you just as physically and mentally engaged. It's also a good time to work out any issues that show up when you've been playing on a regular basis. You may find that your body needs some extra stretching on days after you play or that you seem to play best after a light workout with resistance bands.

To keep the chest, shoulders, and triceps busy during in-season workouts, but without hitting them so hard that they might affect your ability to swing the golf club the next day, we shift the emphasis to balance and body control. 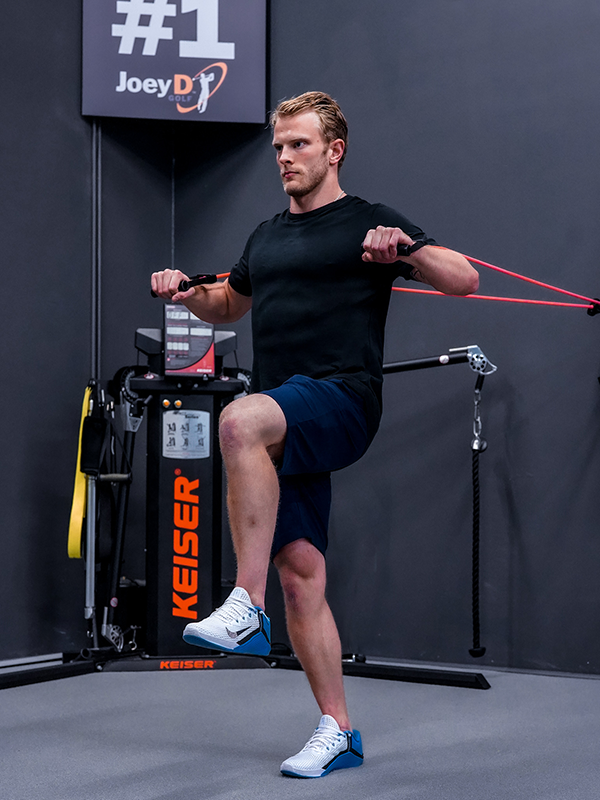 Keeping your upper body tall and quiet, press both arms straight out in front of you. You'll feel this in the chest, shoulders, and arms, but you'll probably feel it just as much in your legs and core. That's a good thing. Hold the arms out in this extended position for a two-count and then return to the starting position to complete the rep. Go slow. This is about how well you can move in an unstable position; it's not about how fast you can flail. Do three sets of ten reps standing on both the right and left legs. 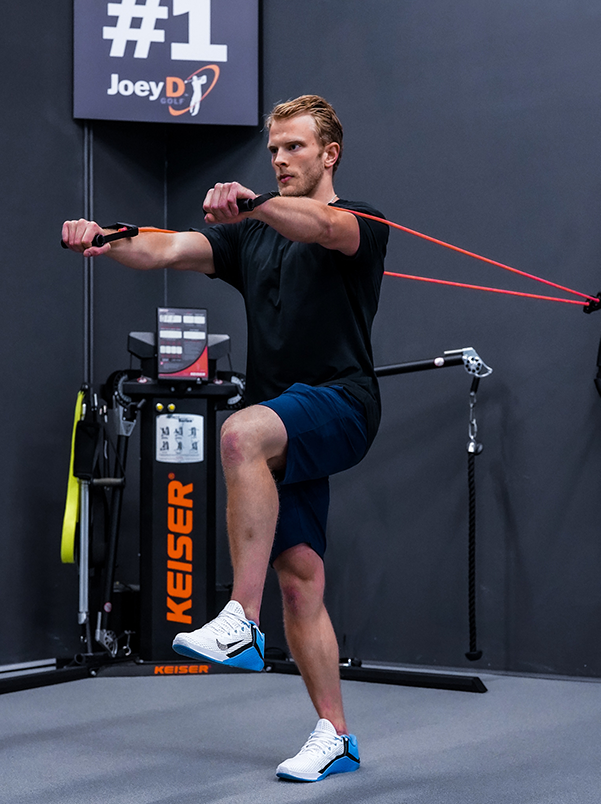 Train for Golf Year Round

While you may not be able to play golf year-round, you can be working on your golf fitness twelve months out of the year. For more things to do during your off-season, check out the video Coach Joey D did for our friends at PGA Tour Active. And definitely don’t forget to check out the free eBooks we have available, as well as the free sample no-equipment-required workouts at hititgreat.com.