If you've read any of our blogs or eBooks or hung out with any of our coaches for more than 30 seconds, you're probably familiar with one of our primary philosophies: you can only swing the club as well as your body will allow you to. Usually, when we say this, we're referring to the bones, muscles, and nervous system that make up the human body. When they've been optimized to play the game of golf, they'll allow you to swing the club pretty efficiently. 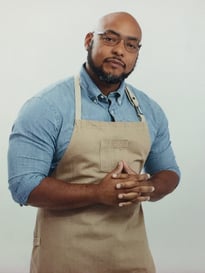 Today, though, we're going to look at that same philosophy from a different angle; we're going to look at how to fuel that body that's going to swing the club. We sat down with Chef Michael Parks, the man who is responsible for fueling the body -- and the game -- of the world's number one golfer. You've read a lot about the Dustin Johnson golf workout that DJ does here at the Joey D Golf Sports Training Center; now find out about the Dustin Johnson Diet.

Survival of the Fittest

In the same way that a physically optimized body will perform better than a deconditioned body, a properly fueled body will perform better than an improperly fueled body. For the 2020 FedEx Cup winner and Masters champion, the demands of the sport -- between travel and tournaments -- make traveling with his own chef a necessity. This year's delayed and abbreviated schedule took the usual PGA Tour schedule and ramped it up exponentially. Players didn't have the luxury of being able to rest between big events. Two major championships and all three rounds of the FedEx Cup were played within a seven-week span. And a few weeks later, the Masters got under way at Augusta.

This year was about the survival of the fittest. And if sound nutrition wasn't part of your golf fitness plan, you were doomed. But, far from doomed, DJ thrived. Between the summer and the fall this year, Dustin won four times -- the Travelers Championship, the Northern Trust, the Tour Championship, and the Masters. It was an impressive run that probably wouldn't have happened without a sound and strategic nutritional game plan. 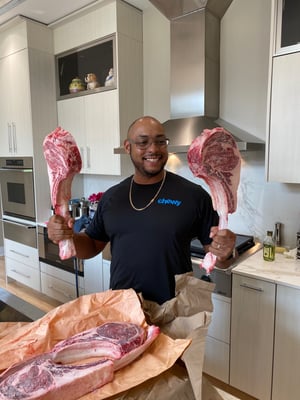 Chef Mike has DJ on a protein-heavy diet to deal with the amount of playing and working out he does. "Everything that we eat has protein in it," according to Parks, who studied at Le Cordon Bleu College of Culinary Arts and has been in the fine dining industry for over a decade. But don't picture DJ sitting down to a steak at every meal. Protein sources include everything from legumes and grains to fish and lean cuts of turkey.

Alongside those protein sources are sides that keep DJ's energy levels up and his anti-inflammatory responses strong. And that means lots of sweet potatoes and broccoli. "It's really not all that varied," says Parks with a laugh. "It sounds kind of boring, but we eat the same things a lot, so I have to prepare it differently, so they're not always seeing the exact same things. If we're having sweet potatoes one day, I might do sweet potato wedges the next day and then maybe a cauliflower-sweet potato mash after that. You have to be creative!"

Chef Mike also has to be creative with the timing and portion control of meals. An early tee time requires a different strategy than when DJ has an afternoon tee time.

With so little down time once the season relaunched in June and with an off-season that can seemingly be measured in minutes, injury prevention, recovery, and maintaining proper energy levels are the keys. Chef Mike also turns to a pair of fresh-pressed juices -- an anti-inflammatory juice to help with DJ's post-round and post-workout recovery and an energy-boosting formula to keep the number one player in the world stay sharp. 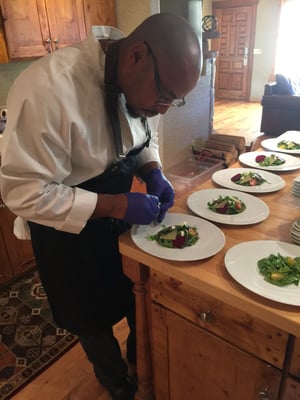 These fresh-pressed juices are vital to keeping Johnson firing on all cylinders between meals. "At the Masters, they actually asked for the juices. They wanted some in the bag," says Parks. "One day they called me and I had to drop them off at the gate at like 4:00 in the morning."

Overall, DJ's breakdown of protein, carbohydrates, and fats comes to about a 60-20-20 ratio. That's a high percentage of protein for the average person, but Johnson is a professional athlete who's won multiple major titles and who plays four-plus rounds a week, hits about a million balls, and works out just about every day.

"I get a lot of messages on LinkedIn from people asking me what they should eat or what I'm feeding DJ and then when I tell them what I'm feeding him, they're like 'I'm not eating that!' or "I can't eat that!'" How to Optimize Your Diet

If you're looking to optimize your diet for your game but aren't ready to make the full leap to the Dustin Johnson Diet, here are some takeaways from Chef Mike's plan: stick with lean sources of protein, try to get your carbs from slow-burning whole grains, look for veggies that are high in antioxidants and anti-inflammatories like sweet potatoes, broccoli, and kale, and stay hydrated.

DJ knows that proper nutrition isn't just for the here and now; it's a lifestyle choice that's not only allowed him to win on the Tour for 13 consecutive seasons, but one that's also is also setting him up for possibly one of the greatest careers in golf history. But it doesn't matter if you're the best player on the planet or the 20th best player at your club, if you want to get the most out of your body, you have to be aware of what you're putting into your body.