I've been in the fitness world for most of my life and I've been involved with the PGA Tour for almost 20 years. I've seen plenty of things that have caused a player to lose his edge and slip athletically: injuries, lack of focus and discipline, improper nutrition, etc. Over the past couple of years, though, another factor has become more and more responsible for players not being able to perform at the top of their ability: economic pressure. With the PGA Tour season now being essentially a twelve-month long schedule of events, the lack of any real off-season is leaving many pros dealing with burnout both physically and mentally.

END_OF_DOCUMENT_TOKEN_TO_BE_REPLACED

But if you followed the action at the Hyundai Tournament of Champions in Maui, you would have seen a familiar face in a very unfamiliar position. It wasn't completely foreign territory. I had caddied for Vijay Singh many times back in 2004 and 2005, but I never planned on becoming the Brett Favre of caddies and coming out of retirement to carry the clubs. Life happens, though, and when Dustin Johnson's brother and caddie, Austin, went down with an injury, you do what you have to do.

END_OF_DOCUMENT_TOKEN_TO_BE_REPLACED

The Off-Season is the Most Important Season of the Year

In a lot of parts of the country, once Thanksgiving Day has come and gone, the golf season is just about over. The clubs may make a cameo appearance over the next few months during a weekend to Hilton Head or Myrtle Beach, but for the most part, once the clock strikes December, your playing days are done.

END_OF_DOCUMENT_TOKEN_TO_BE_REPLACED

If you've paid attention to anything I've said or written about golf fitness over the past 15 years, you know I'm all about the muscles you've probably never heard of. Sure, big biceps and huge pecs might make you look great out on the course, but it's strong and stable Subscapularis and Gluteus Medius muscles that will actually let you play great on the course.

END_OF_DOCUMENT_TOKEN_TO_BE_REPLACED

Shovel Your Driveway, Fix Your Swing

I've been feeling a little bit guilty recently. Last week, I was at Pebble Beach and I honestly don't remember when I've been in such a beautiful location and had such consistently beautiful weather. I don't feel guilty about enjoying perfect weather; I've worked very hard to get to where I am in my career. I tweeted out what I thought were some amazing pictures from my week, but started to feel some twinges of guilt when I saw some of the weather pictures that a lot of my Twitter followers were tweeting back.

END_OF_DOCUMENT_TOKEN_TO_BE_REPLACED

I was going to write about the state of golf-specific training and conditioning as we enter 2015. To be honest, it's reached a level of acceptance and recognition that I never imagined it would. When I started working with golfers back in 2000, the idea of sport-specific training for golf was where it was for other sports back in the 1970s. Sure, there were a few guys who understood the need to be fit, but there wasn't any real plan or strategy for how to adapt the concept of "fitness" to the world of golf.

END_OF_DOCUMENT_TOKEN_TO_BE_REPLACED

Just because I live in Jupiter, Florida, where we experience perfect weather all year long, it doesn't mean that I don't know what's happening in other places around the country. I have the Weather Channel. I have an iPhone. I can see when and where it starts getting cold and snowy up north. Sure, I may smile -- or even laugh -- when I see that it's going to be 12 degrees somewhere while it's 80 and sunny in my backyard, but as someone who deals with avid and rabid golfers on a daily basis, I know that to a lot of you, the onset of winter signals the end of the golf season.

END_OF_DOCUMENT_TOKEN_TO_BE_REPLACED 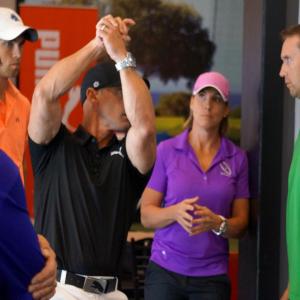 In the grand scheme of human evolution, the concept of golf-specific training and conditioning is, essentially, still a newborn baby.

Back when I started working with golfers in 2000, there weren't a whole lot of golfers working out -- and those who were working out weren't generally doing it in a very golf-centric way. I was among a group of less than a handful of people trying to connect the world of golf with the world of fitness.

END_OF_DOCUMENT_TOKEN_TO_BE_REPLACED

Is Your Tip Jar Full Yet?

I'm constantly asked for "tips" on how someone can play better golf.

I appreciate and am honored that people think that I have a handful of "tips" that I can toss out to help someone's game, but the truth is that "tips" don't work.

END_OF_DOCUMENT_TOKEN_TO_BE_REPLACED

Memorial Day and the Fourth of July have come and gone and Labor Day is still about a month and a half away. For a lot of golfers, this is the middle of the golf season. In theory, this is when you should be playing your best golf. Even with the extra-long winter that a lot of the country experienced, you should have shaken any rust off your game by now. And you still have a few weeks before the dog days of August start to really test your stamina and endurance.

END_OF_DOCUMENT_TOKEN_TO_BE_REPLACED
Previous All posts Next